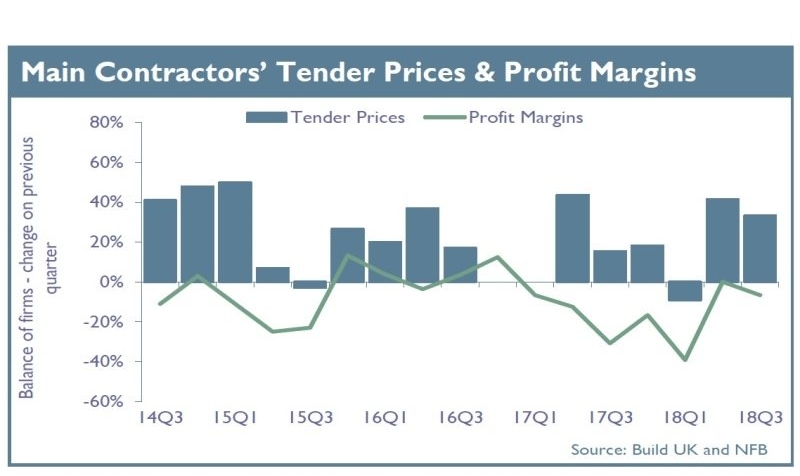 Most of the construction industry experienced modest growth in the third quarter of 2018, following a weather-related boost to activity in the second quarter, according to the survey of product manufacturers, contractors, civil engineers and SME builders compiled by the Construction Products Association (CPA). But rising costs are increasingly an issue.

The CPA’s Construction Trade Survey for 2018 Q3 shows that during the quarter, a net balance of 27% of product manufacturers, 25% of main contractors, 16% of SME builders and 10% of civil engineering firms reported an increase in activity. Output was reported lower for most specialist contractors, however.

The new orders and enquiries logged in Q3 indicate that the drivers of growth in the next 12 months will be private housing, repair & maintenance and infrastructure work. Rising input costs have been reducing profit margins for main contractors and specialist contractors since the beginning of 2017, the CPA says.

In the third quarter of 2018 a net balance of 80% of main contractors reported a rise in materials and labour costs, 90% of product manufacturers reported an increase in fuel costs and cost rises for civil engineering contractors reached a three-year high.

CPA senior economist Rebecca Larkin said: “The industry looks to have maintained some of the momentum from its catch-up in the second quarter. However, beneath the top-level growth rate, firms throughout the supply chain are grappling with a narrowing base of activity led by private housing and infrastructure work and rising costs for labour, raw materials and fuel.

This triple threat for input costs is placing a clear strain on contractors’ profit margins, worsening confidence in an already-heightened environment of risk aversion.” Richard Beresford, chief executive of the National Federation of Builders (NFB), said: “The latest trade survey indicates a general increase in construction output, workloads and enquiries for SME contractors throughout the third quarter of 2018. This trend reflects the effect of the unseasonably warm weather in lifting up overall industry performance. The fall in profit margin for 7% of main contractors and 33% of specialist contractors is rather worrying because it is less than one year since the collapse of Carillion. With the economy facing further uncertainty in future months with the UK’s departure from the EU in March 2019, contractors operating with falling profit margins are a reason for concern.” Civil Engineering Contractors Association director of external affairs Marie-Claude Hemming said: “We welcome the fact that the infrastructure sector has enjoyed a second quarter in a row of growth, but there are some concerns as to poor growth in future orders. Given the substantial pipeline of work that exists, we would expect that order books would be rising at a greater rate that they have done in the last six months.

It may be that clients are wary of investing given the uncertainty surrounding the effects on the economy of the UK leaving the European Union in 2019, and the inability of businesses to plan adequately for the future, given the failure of Brexit negotiations to progress beyond their current impasse.” Article courtesy of The Construction Index. https://bit.ly/2yWO4HB