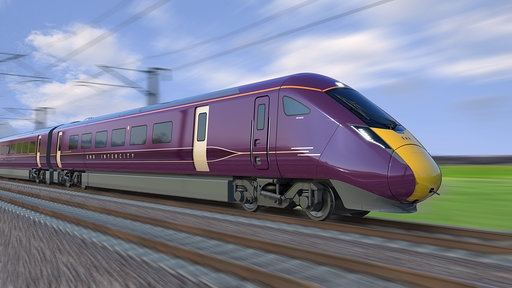 Hitachi Rail will manufacture 165 carriages for the East Midlands Railway franchise at its County Durham factory after winning a £400m contract.

The new trains will be made in Newton Aycliffe after the deal was secured with Abellio UK, which was recently awarded the eight-year franchise by the Department for Transport.

The new intercity trains will start operating in 2022 and will serve the main cities and towns on the Midland Main Line including Sheffield, Chesterfield, Nottingham, Derby, Leicester and Lincoln as well as Kettering and London St Pancras.

Abellio has ordered 33 five-carriage trains, which will regularly be operated in ten-carriage formations.

Based on Japanese bullet train technology, the new fleet for EMR is the sixth intercity fleet that Hitachi will deliver to UK train operators.

The funding package for the new Hitachi trains is led by Rock Rail and the fleet will be financed through Rock Rail East Midlands plc and leased to Abellio for the life of the franchise. As with Rock Rail’s previous new rolling stock deals, debt will be provided by institutional investor organisations.

Dominic Booth, Abellio (UK) managing director, said: "These new trains form the centrepiece of our ambitious plans for a complete replacement of all the trains on the East Midlands Railway and are a more than £600m investment to really improve the region’s railway.

"They will respond to what our passengers have told us they want with more frequent services, faster journeys between the East Midlands and London, and provide more capacity with 80 per cent more seats into London in the morning peak."

Karen Boswell, managing director for Hitachi Rail UK, added: "This announcement will be welcomed in workshops and engineering centres across the country, thanks to our large network of UK suppliers.

"Our train factory in County Durham sources train parts from across the country, including a significant amount from the region where the new trains will run.

"Hitachi is delighted that EMR passengers will soon be receiving the very latest model of our new intercity trains, which are already proving popular and increasing satisfaction among passengers in other parts of the country."