SITE OF HISTORIC HOTEL PUT UP FOR SALE 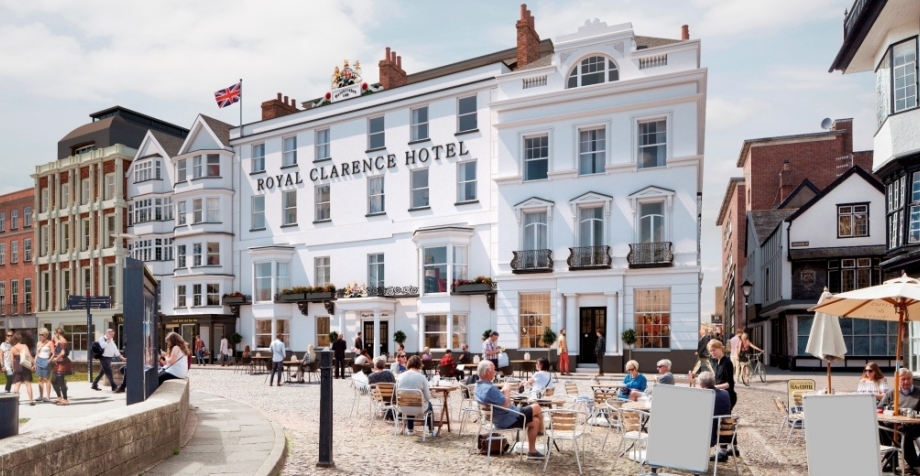 The site of the Royal Clarence Hotel in Exeter, which was destroyed in a serious fire three years ago, has been put up for sale.

The hotel, thought to be the oldest in the UK, partially collapsed following a fire which broke out in an adjacent building on Cathedral Green in October 2016.

Owner Andrew Brownsword Hotels has completed significant works to protect and restore the site’s historic fabric. With enabling works set to be concluded, it will now be offered for sale.

Andrew Brownsword said: "The extensive recovery and preparation work that has been completed at the site means it now offers an excellent opportunity for the next stage of development and I have had to concede that this will be realised by others. It was always my vision to deliver a new hotel at the level of luxury and quality as others within our group, however, the financial and resource investment made in the demolition, historic restoration and enabling works has been significant and this has meant that it is regretfully unviable for us to develop the level of hotel that we had envisaged.

"This has been a heartbreaking decision for us to take, but, alongside the residents of Exeter, we want to see this corner of Cathedral Yard resorted to its former glory. We believe that selling the site now to a group that operates to a different business model to ours, will enable them to start building, unencumbered by all of the challenges and costs already overcome by us, and is the only way we can conclude to make the rebuild happen quickly and viably."

Work undertaken at the site since the fire has included initial demolition of damaged structures, followed by excavation and archaeological work to save as many historic features of the grade II-listed building as possible. Extensive ground works have been completed to strengthen the foundations of the site in order to maintain and restore the remaining historic fabric.

Above ground masonry and structural repairs have also been completed to surviving historic fabric allowing for integration in the reconstruction of the building. Archaeologists have provided a watching brief during this process with all finds being documented and stored in controlled conditions. Planning permissions are also in place for the rebuild.

Start now
You may also like
How to Choose the Right Tender. Development of 36 apartments has been funded Housing development will start to take shape with new landscape plans It's Genius! But can it really be this easy? So it's here at last!
Full Unrestricted Access
Start Your 14 Day Free Trial
Start Free Trial