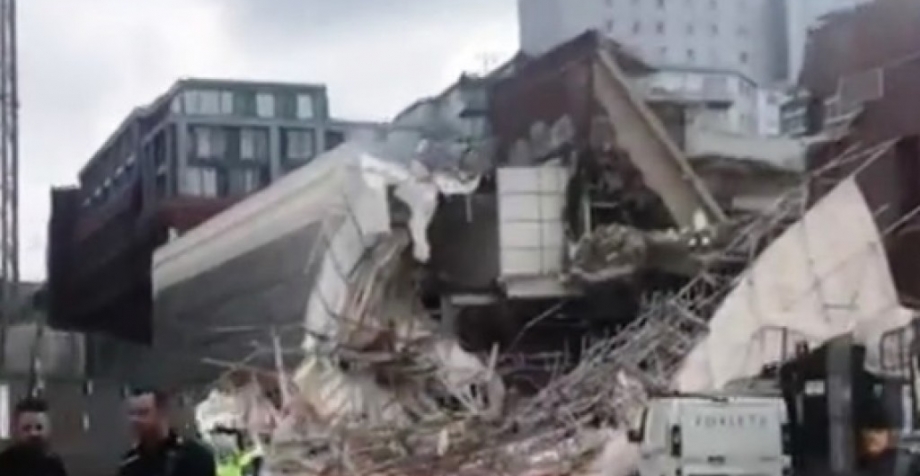 Royal Berkshire Fire & Rescue Service, South Central Ambulance Service and Thames Valley Police were called at 11.20am on Thursday 1st August 2019 to reports of scaffolds collapsing at a site in Garrard Street in Reading.

Thermal imaging cameras later confirmed that no one was trapped under the debris, as had initially been feared.

The scaffolding was screening a derelict shopping centre that is being demolished as part of a £500m housing and retail development at Station Hill in Reading. Developer Lincoln MGT – a joint venture between US firm Lincoln Property Company and MGT Investment Management – are planning 250,000 sq ft of office space and 538 build-to-rent flats.

The demolition contractor on the job was McGee. A McGee spokesperson said: “We can confirm there has been an incident at one of our sites in Reading. We are investigating and will provide further updates when facts are available.”

Thames Valley Police said that three people were treated for injuries at the scene and then taken to the Royal Berkshire Hospital in Reading.

The Health & Safety Executive (HSE) has already begun its investigations.  Unite, the UK’s construction union, said the inquiry must be swift, open and transparent. Unite national officer Jerry Swain said: “Everyone must be very grateful that the injuries reported so far have not been serious. It is hoped that there are no other injuries and that no one remains trapped under the collapsed scaffolding. If fatalities have been avoided, that is only through luck.

“A full inquiry must not just include the immediate reasons for the scaffolding collapse but also examine whether the work had been sub-let, were all workers on site properly employed, and did they all have the appropriate skills and training. It is essential that we learn the lessons from this accident to prevent similar serious incidents in the future.”

Start now
You may also like
Plans to build tallest building in Sheffield is backed How To Collect High Quality Leads. Time is Money, How Much Are You Wasting? So it's here at last! New website coming soon!
Full Unrestricted Access
Start Your 14 Day Free Trial
Start Free Trial